CHRISTINE WANGER - Avian Advisor
Hi, My name is Christine Wanger, I live in the UK where I was trained 20 years ago by an Avian vet to care for sick, injured and orphaned wild birds, a voluntary job I have enjoyed doing ever since. I have also been a keeper of African Grey parrots since 1989 so have a wide knowledge of birds in general and African Greys, including health, hygiene, breeding, feeding, taming & many other tips and tricks. 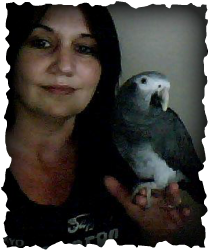 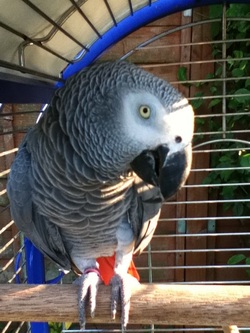 It all started on July 2nd 2011 when I received a phone call from my Avian Vet. I had been to visit the surgery with one of my children's budgies which had developed a tumour. It was the first time in a very long time that I had needed to visit the surgery as my parrots, luckily have always been very healthy and happy. The surgery which I visited was where I had received my training many years ago by a top Avian Vet called Dermod A. Malley during the years when I was nursing sick birds which were bought to my sanctuary -'The Wild Bird Orphanage' which I began back in 1989. Although some of the staff members still remained, my mentor Dermod Malley had left the surgery to retire and a new vet was in place. During my visit with the sick budgie, I explained to the new vet how I used to work along side the surgery and how I had also for the past 22 years kept African Grey Parrots and that they were my passion. I still take in sick, injured and orphaned wild birds from time to time but not on such a large scale as I had to leave my Sanctuary work when I chose to have children as there was never enough time for both as they were both full time jobs!

The following day, the new Avian vet telephoned me and asked me if I could take in an African Grey parrot for them. He was suffering from a serious disease called Aspergillosis and needed somebody experienced to care for him while he was being given treatment. His owners were an elderly couple who had tried to treat him at home for the past month but had problems giving him the required medication and they had got to the stage where they could no longer afford the cost of the vet bills which were running into hundreds of pounds and they had no pet insurance. The parrots name was Red. Red had lived with the couple for 20 years and as much as they loved him, they knew they could not help him financially with the treatment he required or practically as treatment involved was something that an experienced person would need to do, so they had made the choice to leave him at the vet surgery to either be put to sleep or re-homed with somebody who could take care of him. How could I refuse! My main concern was for the health of my existing 2 parrots so I went to the surgery and spoke with the vet and he explained all that I needed to know including details of all of Reds tests and xrays so that I could confirm that housing him would pose no threat to my existing birds.
Red was a beautiful bird, as I approached his cage which was on top of the examination table at the surgery he bowed his head for a stroke, his breathing at this time was not good at all, very croaky and rapid and I could see the effort it was taking him to breathe as his chest was going in and out beyond normal breathing and there was also movement in his tail where he was using all his fight pulling his chest in and out to breathe, It was so sad to see. I had seen many sick wild birds over the years during my wildlife work but nothing that ever prepared me for seeing a beautiful African Grey in this kind of health, I was extremely lucky and over the 22 years of keeping African Grey's my birds were always well cared for and in the best of health. So home we went, along with Red the new member of our family, a bag full of medication and a nebuliser machine to aid his breathing. I knew this was going to be no easy task as the xrays had shown the aspergillosis fungal spores were deep inside Reds lungs and there was no indication of what had caused it. Birds with a low immunity are more susceptible to aspergillosis, we do not know if the previous owners were smokers who smoked around him but we do know he was fed alot of peanuts in the shell which carry mould and can be a major factor in contracting this awful disease. How he got Aspergillosis didnt matter, the only thing that mattered now was fighting to save this beautiful bird. The vet explained his odds of survival were low and this disease that he was fighting was a killer.

Red settled into his new home with us amazingly well. Although he was out of his cage all day we could not allow him direct contact with the other 2 parrots but they knew each other was there and stayed their distance from one another and im sure this helped Red settle in with ease. Red was a talker too, as poorly as he was we still got a wave with his little foot and 'Byeeee' as we left the room along with his rendition of the song "Im forever blowing bubbles", lots of animal sounds and a few other noises too! He was an absolute delight and so much fun! He took a particular shine to my eldest son Jack and would walk up the stairs every morning to jump into poor Jacks bed and try to mate with him! Xboxing also became one of Reds favourite past times too as he would sit on the back of jacks chair and take in all the action - my children really loved every moment with Red, I think in his short time with us he became my third child and he loved every minute of his new lifestyle hanging out with the youngsters! I had spoken to his previous owner on a number of occasions and she had said that Red would only come to her and hated her husband, but here in his new home he was loved and handled by all but his love for Jack shined through. This goes to show how adaptable these beautiful birds can be and how different they can be depending on how they are treated!
During the 9 weeks Red was with us, he had several episodes where he would seem better and then decline again. He always ate well and continued to be active - not much got him down! Twice a day he was on his nebuliser machine to help open his tubes and ease his breathing. The machine was loaded with a special disinfectant which could be inhaled in the hope it would kill off some of the fungal spores in his lungs along with the very stong medication he was given daily. Xrays were performed again at the end of july and Red had to be put under anaesthetic. The results showed that the spores were still the same even after over a months worth of treatment. It was a sad day but we had to keep fighting. After the xray, my vet told me of a new drug which was available on the market, but as the surgery was now a franchise chain - they did not stock the drug which was having fantastic results. He told me to buy the drug I would have to buy a whole packet of the pills when I only needed one tablet for Red and that it would cost me over £600! So far Reds treatment had topped over £2,000 and luckily the surgery so far had been paying the bill but they would not supply this drug so if I wanted to try it it would mean paying £600 for them to order it. Reds breathing had really declined by this time and the xray outlook did not look good. But I knew it was the only choice, I had spent a day or 2 thinking about it and weighing up the odds while doing some research of my own on this new super drug and decided that I had to try and save Red, we were all so attached to the little Guy by this time. I was angry that I was not told about this drug sooner as it may have meant not having to watch Red suffer with his breathing over the weeks he had been with us and by now he may have been cured! Unfortunately before the drug was supplied to the surgery Red died in my arms. My whole family was devastated. He had such a huge impact on us all and even though he was only with us a short time it was like loosing a family member. That was exactly a year ago. I knew I had to do something to help other parrots and honour the 20 gracious years he was on this planet. But what could I do? .......