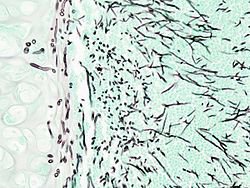 What is aspergillosis and what causes it?
Aspergillosis is a respiratory disease of birds caused by the fungus Aspergillus, which is found almost everywhere in the environment.

A. fumigatus is the most common species of the fungus to cause disease, although A. flavus, A. niger, and others can also cause problems. Aspergillus grows readily in warm and moist environments. The microscopic spores of the fungus become airborne, and poor ventilation, poor sanitation, dusty conditions, and close confinement increase the chance the spores will be inhaled.
Usually, the fungus does not cause disease, however, if a bird does not have a healthy immune system, it can cause illness. Predisposing factors include other illnesses, stress, poor nutrition, poor husbandry or unsanitary conditions, another injury to the respiratory system (e.g.; smoke inhalation), and prolonged use of certain medications such as antibiotics or corticosteroids.

The combination of the number of spores in the environment and the presence of predisposing factors determine which birds are most at risk of disease. Aspergillosis appears to be more common in parrots and mynahs than other pet birds.

What are the signs of aspergillosis?
Aspergillosis can follow one of two courses - acute or chronic. Birds with acute aspergillosis have severe difficulty breathing, decreased or loss of appetite, frequent drinking and urination, cyanosis (a bluish coloration of mucous membranes and/or skin), and even sudden death. The fungus generally affects the trachea, syrinx (voice box), and air sacs. The lungs may also be involved. Diagnosis is generally made through a post-mortem examination.

Chronic aspergillosis is much more common, and unfortunately, much more deadly due to its insidious nature. The bird may not become symptomatic until the disease has progressed too far for a cure. The respiratory system is the primary location of infection. White nodules appear and ultimately erode through the tissue, and large numbers of spores enter the bloodstream. The spores then travel throughout the body, infecting multiple organs including kidneys, skin, muscle, gastrointestinal tract, liver, eyes, and brain.

Respiratory symptoms will be the first to occur but will depend on the location of the greatest areas of colonization. Difficulty breathing, rapid breathing and/or exercise intolerance are common. If the syrinx (voice box) is involved, a change in voice, reluctance to talk, or a "click" may occur. Nares may become plugged or you may see a discharge. Eventually, severe respiratory compromise may kill the bird.

Other signs and symptoms will vary, depending on the other organs involved. If any portion of the central nervous system has become involved, the bird may have tremors, an uneven or wobbly gait, seizures, or paralysis. With liver involvement, a green discoloration to the urates may be seen, and the veterinarian may feel an enlarged liver. Generalized, non-specific symptoms can include loss of appetite leading to weight loss, muscle wasting, gout (painful, inflamed joints due to urate deposits), regurgitation, abnormal feces or diarrhea, excessive urination, depression, and lethargy.

Spores can penetrate fresh or incubating eggs and will kill the embryos.

How is aspergillosis diagnosed?
Aspergillosis can be very difficult to diagnose since the signs of disease mimic those of many other illnesses, especially in the chronic form. The veterinarian will need a detailed history of the course of the illness, and an accurate description of the diet and husbandry of the bird. Radiographs, a complete blood count, and a chemistry panel may help support a diagnosis. Endoscopy can be used to view lesions in the syrinx or trachea, and a sample can be taken for culture and microscopic examination, and possibly PCR testing for the presence of Aspergillus, which can confirm a diagnosis. A diagnosis can also be supported by a specific blood test panel to look for aspergillosis. Sometimes, however, the test can be falsely negative or falsely positive, so the tests must be interpreted in combination with the other findings.

How is aspergillosis treated?
Surgery may be performed to remove accessible lesions. Antifungal drugs such as itraconazole and amphotericin B may be administered orally, topically, by injection, or nebulizing, depending upon the drug. There are several reports that itraconazole may be more toxic to African grey parrots, when compared to other species. Therapy needs to be continued for weeks to months and more than one antifungal drug may be used. Supportive care such as oxygen, supplemental heat, tube feeding, and treatment of underlying conditions are often needed. Unfortunately, the prognosis is always guarded.

How can aspergillosis be prevented?
The importance of good husbandry and diet to prevent outbreaks of aspergillosis cannot be overstated. Keep your bird in a well-ventilated environment. Clean food and water dishes every day. Replace substrate (material lining the cage bottom) regularly. Remove your bird and thoroughly clean cages, toys, perches, etc., at least once a month. Pay attention to good nutrition, offering the right combination of fruits, vegetables, pellets, and only a sprinkling of "treats." Essentially, you want to do everything you can to alleviate stress in your bird's life and provide a scrupulously clean environment.

Seizures caused by Hypocalcaemia syndrome associated with low calcium levels in the blood. Supplementing the parrots' diet with calcium and Vitamin D, and providing access to natural light are important factors in preventing this problem. Birds aged 2 to 5 are most commonly affected. Vet's often treat grey parrots suffering from seizures presumptively with intravenous calcium gluconate, as well as with diazepam.

A lot of the health problems associated with low calcium levels can be prevented by providing sufficient natural sunlight to our pets. Even those situated by a window will not benefit from the sun because the window blocks the UVA and UVB rays needed to synthesize vitamin D necessary for bone health. Birds use sunlight by preening their feathers. The substance on the feathers will undergo a chemical reaction from the sunlight producing Vitamin D3 which the bird ingests with further preening of the feathers. The indoor bird does not have the benefit of this reaction.


The most common health problems associated with vitamin D deficiency are: weakened immune systems / susceptibility to diseases, soft bones, bent keels, splayed legs, abnormal beak development, reproductive problems (egg binding, soft-shell eggs, dying chicks) as well as seizures and, to a lesser extend, Stargazing (twisted back) In areas where access to natural sunlight is limited (such as in the northern hemisphere during the winter months), full-spectrum lamps can be used to provide UVA and UVB rays. 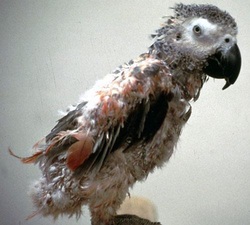 What is PBFD?
PBFD stands for psittacine beak and feather disease. This viral condition of birds is responsible for damage to the beak, feathers and nails as well as the immune system of infected birds.

Which bird species are affected by PBFD?
PBFD affects both pet and wild parrots. The virus is found most frequently among cockatoos, African grey parrots, lovebirds, Lories and lorikeets, Eclectus parrots and budgerigars.


What are the symptoms?
As mentioned above and implied by the name, PBFD typically affects the feathers of infected birds; over time the beak and nails may also become affected. These classic symptoms are often first seen in African grey parrots and cockatoos between 6 months and 3 years of age. Birds may first lose their powder down (the white, fine powder produced by specialized feathers to help maintain feather health). This is typically noticed by a beak that has become glossy rather than the more typical matte appearance that is caused by powder down. More abnormal feathers will then develop progressively. These feathers are short, fragile, malformed, and prone to bleeding and breaking. Over time there will be a significant loss of feathers as the follicles become damaged. Some birds may survive for many months with this condition, but over time the beak and nails may become brittle and malformed. This condition is painful for the bird and also allows secondary infections to take hold. While an avian veterinarian may be able to make sick birds more comfortable and treat many of these secondary infections, the vast majority of birds will ultimately die from this disease.

Young birds, particularly African grey parrots, may become sick and even die before feather changes occur. Often these birds are less than 7 months of age. These birds will lose their appetite, only be able to slowly empty the crop and gastrointestinal tract, and may regurgitate. Many of these birds will die of the acute form. Young cockatoos can also develop this acute form. In addition to the non-specific symptoms observed in grey parrots, feather changes are more likely to occur in sick young cockatoos.

How is PBFD diagnosed?
Sometimes your veterinarian will have a strong suspicion that your bird has PBFD based upon appearance, age and species. However, it is quite likely that your veterinarian will also suggest performing a PCR test to confirm the diagnosis. This test uses advanced techniques to look for the virus’ DNA. Typically the test looks for the virus in blood, but your veterinarian may chose to take a swab from your bird’s mouth and vent. As mentioned above, your veterinarian may also suggest testing new birds, even if there are no signs of disease. This may be done to protect other birds in your house, or to increase your awareness that your new pet may be carrying this potentially serious and life-threatening virus.

In any case, a positive test should be rechecked 90 days later as there are instances in which birds — even those of highly susceptible species — can be transiently infected and clear the infection without ill health. This is important to keep in mind as a single positive test should be taken seriously but not as a certainty of severe disease and death.

Can you treat PBFD?
Unfortunately there are no antiviral drugs available to fight the virus. Your avian veterinarian can help keep your bird comfortable and fight secondary infections for variable periods of time. Sadly, however, the majority of clinically affected birds will die within a few months to a year.

Is there a vaccine to prevent PBFD?
Despite extensive research, there is still no commercially available PBFD vaccine.

How can PBFD be prevented?
Great steps have been taken to reduce the prevalence of PBFD. This condition used to be far more common prior to the ban on importing foreign parrots in 1994. Since that time, many breeders have taken pro-active steps to reduce and eliminate this virus from their flocks and subsequently from the pet bird market.

Unfortunately not all breeders have taken these steps and even if one breeder has, birds may be commingled with birds from other breeds as they travel from wholesaler to retail pet distributors and their new home. As such the best thing you can do is have your bird examined by an avian veterinarian and allow diagnostic testing for this and other diseases that your bird could have been exposed to. In addition to testing new birds, it is also wise to institute a strict quarantine of new additions for up to two months to help ensure they are free of disease before introducing them to other birds in your household.