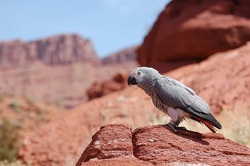 There are many images that the summer can convey, but there is one feeling that you cannot forget for you own health and the health of your pets. That feeling is one of summer heat. No matter where you may live, the summer can bring along high temperatures. If you live in certain areas of the country, it can bring along scorching temperatures. You already know that this kind of heat can be dangerous for you and your family. Did you know that it can also be dangerous for your pet parrot?

Avoiding Heat Problems for Your Parrot:
What you must remember is that parrots have much smaller bodies, and their body chemistry makes them much more susceptible to the effects of heat. You may be thinking that this will not be a problem simply because your parrot stays indoors where you control the temperature. However, you never know when a problem may arise. Your air conditioner could quit working. You could have to leave your home for a while for one reason or another. You cannot always assume that your bird will be safe from the summer heat.

Symptoms of a Parrot Overheating:
If your parrot is exposed to heat, then you need to learn the warning signs of heat related health problems. The quicker you can deal with them, the quicker you can make sure your bird is safe. Extreme heat exposure can be fatal, so it is vital that you work fast. Just how will your bird act if it becomes overheated? Here are some of the things you can look for.

Panting is usually one of the first signs of overheating. Just like dogs and cats, parrots will pant in an attempt to cool down.
Generally, the heat will be radiated from a parrot’s feet as well. If your parrot is getting overheated, you may notice that its feet are very hot.

If hyperthermia becomes close to fatal, the bird may become unresponsive.
In order to avoid heat problems, you should take a few steps. Never leave a parrot’s cage in direct sunlight. If you notice your bird panting, move it to a cooler spot. You can also mist the bird with water, wrap it with a wet towel or even allowed to stand in a plate or dish filled with cool water. If your parrot becomes unresponsive, it is best to take it to a veterinarian immediately.

The summer may bring along a great deal of fun, but it also brings dangers in the form of summer heat. Make sure your bird does not become overheated by keeping it in a climate controlled room and away from direct sunlight. 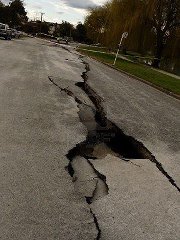 Living in San Francisco, I have a special interest in earthquakes. I experienced the brutal force of the Loma Prieta quake in 1989 and prefer not to experience it again. As an avian behavior consultant, I am also interested in the behavior of parrots before an earthquake strikes, both as an early warning system and for more information into understanding the hard-wired or instinctive nature of our companion parrots.

Jing and I live approximately 450 miles from the epicenter of the Northridge quake. It is far enough away that no humans in the San Francisco area reported feeling the effects of the Northridge quake. The earthquake occurred at 4AM in the morning; however, eight hours before the quake, Jing started her strange behavior. I noticed her staring, as if in a trance, at the ground, sometimes hanging upside down from her perches. She did not want to go into her cage that night; but having no idea what was bothering her, I made her go in anyway.

The next morning she hurried out of her cage and resumed her strange staring behavior for the next few hours. I soon found out about the earthquake and deduced what was happening.

Since then Jing has repeated her earthquake prediction behavior for several small quakes in Northern California. However, when there are quakes with 5.0 magnitudes and below, her attention fluctuates between normal African grey behavior and earthquake alert. This may be because the forces of a major quake produce far more stimuli for her to receive. I can actually predict the magnitude of the earthquake, based on the magnitude of Jing's display. Her behavior prompted me to study other parrots' behavior during earthquakes.

Although no one would think it with her sweet, gentle nature, Jing is a wild parrot who was captured in Africa in 1992. I soon found from my studies that domestically bred African grey parrots gave no forewarning of impending earthquakes. However, all wild-caught Greys, which were observed in the hours before large quakes, responded with the same early warning behaviors that Jing displayed before the Northridge quake. I believe there is strong associative learning passed on from parent birds to offspring that prepares the wild bird to recognize earthquakes as a danger to the nest. Since our domestically bred parrots are not raised by their parent parrots, they miss much of the parental training that characterizes many survival behaviors.

The most distinguishing behavior is the parrot leaning over a cage rim or leaning so far over a perch that it appears to be hanging upside down and staring at the ground. The parrot appears to be frozen in place, so much that you could probably pick it up by the body without any resistance from the bird. This behavior goes uninterrupted before major quakes for as much as eight or nine hours.

The bird tries to avoid going into its cage. This makes sense because the cage is a "trap," rather than a safe place, during an earthquake. A wild bird always has the option of flying away from the earth-connected problem. But birds in cages do not have that option.

It also appears that earthquake prediction among parrots may be "fault" oriented. Earthquakes appear along internal earth fissures called faults. Jing appears very sensitive to all earthquakes located along the San Andreas fault line, where we live, but not to distant earthquakes on other faults in California. Of course, this theory is based on only a few instances, so it cannot be called fact.

OTHER RESULTS AND THEORIES

While this has little to do with predicting earthquakes, the fact that grey parrots are so sensitive that they release or drop tail feathers is important. Cockatiels often release their tail feathers during a night fright. However, not many people have seen their Greys release tail feathers. It appears to happen only to birds that are confined to their cages when an earthquake strikes. There is no evidence of tail feather release before an earthquake. The tail feathers released from the birds surveyed were not "broken" feathers. They were intact feathers that looked as if they were molted.

We do know that Greys are partial ground feeders, as are cockatiels. Tail feather release may be a natural fear response to a ground predator who grasps the parrot's tail. When the bird perceives that it is trapped in a cage during an earthquake, excessive adrenaline production may trigger the release of the tail feathers, much the same as if the parrot were being caught in a predator's mouth.

HOW SEASONS CAN MAKE YOUR PARROT MORE VOCAL 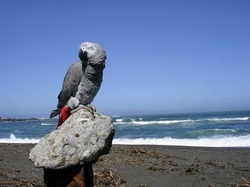 My Parrot Screams More in the Spring and Summer:
With spring and summer comes longer days. The light is brighter, the sun stays out longer and the environment warms up. For the most part, these are the months we all anticipate and enjoy. However, living with a parrot can be quite a challenge during this time of the year. Some households will notice their avian companion becomes quite vocal during the spring and summertime.


So what causes this to happen?
In the wild, longer days and a warmer climate equals breeding season for most birds. Parrots in captivity also experience these changes and it may cause increased hormones. Your bird also anticipates and appreciates the warmer seasons. Your parrot may instinctively relate this to breeding season and begin to call our for a mate. Just take a listen outside; it is as if the world and nature comes alive with light and warmth.

Seasonal Screaming for a Parrot:
When your avian companion vocalizes more during the warmer, longer days it is referred to as seasonal screaming. Seasonal screaming usually only last a few minutes each time and is completely normal. It is important to realize that this type of screaming is not a behavioral problem. Just as your bird vocalizes in the morning when the sun comes up and often signals time to retire at the end of the day, this is a natural trait and should be expected. Screaming to get attention is a problem but hormonal triggers are not attention seeking. With that being said, you could be encouraging hormonal behavior in your parrot which could lead to this mating call.

Hormonal Triggers and a Screaming Parrot:
Parrot owners contribute to hormonal triggers at times and are not aware of it. During the spring and summer months, petting and cuddling your companion bird for long periods of time, especially stroking under the wings, can sexually stimulate a mature parrot. Although it is important to provide affection to your feathered friend all throughout the year you may want to limit sessions of petting during this time if screaming becomes excessive.

If you have a parrot that does not have a behavioral problem and it usually does not scream to seek attention, seasonal screaming will be short lived and will not become an issue. As always, make sure not to react or encourage screaming in anyway for this will only enforce the situation. Don’t worry, soon your feathered friend will return to their normal selves.