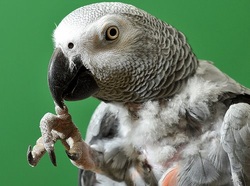 Medical causes of Feather Plucking, Picking & Mutilation in Pet Birds.
There are many known causes of plucking. On rare occasions a cause may be easy to identify and correct. However, in many cases a cause is not identified and the picking is difficult or impossible to resolve. Therefore, feather plucking is one of the most frustrating and complex problems seen by avian veterinarians. It is even possible that once the initiating cause is resolved, a bird may continue to pick from habit or for attention. In many cases, the owner’s frustration over the picking is sensed by the bird, making the bird's anxiety, and therefore the feather picking, worse.

Some disease-related causes of feather plucking include:


In order to perform a thorough evaluation of a bird’s plucking to try and find a medical cause, there are many tests that would necessary. There is no guarantee that performing any or all of these tests will result in a diagnosis.

Non-Medical Causes of Plucking, Picking & Mutilation in Pet Birds
Some causes, not related to any disease, include:
·Boredom in the very intelligent larger parrot species
·Insecurity, Stress, or Nervousness (can be caused by a change in daily routine, a new environment, remodeling, other pets, or a new owner)


Change in your bird’s life may be necessary, but make all changes gradually. Protecting a parrot from traumatic experiences is essential. Overprotected parrots, however, which have not been introduced to change in safe, secure ways are often feather pickers.

In order to perform a thorough evaluation of a bird’s plucking to try and find a medical cause, there are many tests that would necessary. There is no guarantee that performing any or all of these tests will result in a diagnosis. 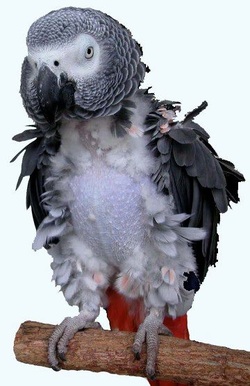 Baths are important for parrots primarily to keep their feathers clean and to encourage preening. Most parrots live in the rainforest where humidity is intense. Humidity helps the skin and the tissues of the respiratory system moist but it is the humidity that causes much discomfort even to humans. Parrots would appreciate the opportunity to relish their baths including those that live in dry areas. Quick baths can be given by providing water containers where they can drench themselves or by spray-misting.

A parrot needing a real bath due to feathers that have become excessively dirty or severely soiled may benefit from the use of a gentle detergent such as a baby shampoo or a gentle dish washing soap. Bathing should be done by someone who has experience in doing it. It is important that soap or water does not get in the eyes and ears of the bird. All the soap should be thoroughly rinsed from the feathers.

When thermostats are placed high during the winter, most heating systems dry the air considerably. This may cause the drying of the parrot’s skin and mucous membranes leading to numerous health problems. Dry skin creates itching and causes parrots to bother their feathers more than the usual.

Some parrots resort to feather plucking and chewing for no exact reason. The beginning stages can be mistaken for moulting or the practice wherein damaged, broken or cut feathers are replaced by new feathers. Moulting happens twice a year, most commonly in spring and in the fall. However, moulting does not expose patches of the skin, the only exception would be young parrots that are into their first moult.

Feather chewing is not as obvious as plucking. This is when the wing, tail or chest feathers have jagged edges or have a look as if they have been ripped-off. The causes and cure are the same for plucking and chewing but it might take some investigation to determine the real reason behind this behavior.

The most common belief regarding the cause of feather plucking is the bird’s need to breed. Another is that the bird has been subjected to abuse and neglect. Although these are all probable causes, there are several other possibilities.

Parrots go through a confusing period of hormone imbalance as they reach maturity very similar to that of a maturing teenager. It doesn’t automatically mean that they are ready for breeding as it is not instinctive for parrots. It is not quite clear whether the shift from a companion bird to a breeding bird can cause such emotional change or upset as to trigger feather plucking. Change in routine can affect the parrots so much to the point of being physically destructive. Emotional upset and high tension can make them take out their frustrations in themselves.

It is very easy to attribute feather plucking to abuse and neglect because of the resulting appearance. Although it is possible, intent to harm is seldom seen in bird owners no matter the amount of anger and frustration involved. Most often, it can be attributed to genuine ignorance of the parrot’s needs. It can also be due to the parrot’s development of intolerable habits forcing owners to place them in areas where they are alone.

This situation gives rise to boredom and lack of stimulus which seem to be the main culprit behind feather plucking. Parrots who are left with nothing to do will eventually find something to occupy themselves – pulling their feathers one by one. Watching them float to the bottom of the cage can be the highlight of their life when there is nothing else available to do.

Feather plucking can also be the handiwork of an over-zealous grooming by a mate. It can also be due to force of habit. Medical problems such as fungal infection can cause plucking and even self-mutilation. The most logical remedy is to correct the cause of plucking once it is determined what the exact cause is. The cure can be a more balanced diet, new toys for stimulus, change of cage location, treatment with medication or whatever is applicable to the problem at hand. The use of mechanical restraint devices such as collars plus pharmcological intervention has recently gained popularity in addressing feather plucking.