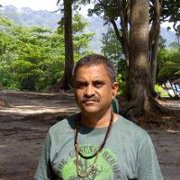 I thought it will be of immense help means of use to narrate how we narrowly rescue Pihu...Pihu was just a 3 months baby and his full feathers were yet co come out when we bought him from a local Breeder,we had hand fed him with syringe for 2 months at least when he gradually started taking food of his own,means all sorts o,f fruits and veges and rice oat meal etc...it was all fine and at around 5 monts old when he started to learn flying and our being a rented house ultimately we clipped his wing a little bit so that he could not take long flights...everything was fine and my wife used to take him to our Balcony any time on his stick...One evening about a month ago when my wife took him to balcony after dinner to make him happy and she was talking to some friends, holding Pihu on his stick all on a sudden pihu fly away in front of her eyes and she thought pihu can not go far off but to the contrary Pihu almost fled around 70 to 80 mtrs and being night time she couldnot exactly locate where Pihu fell,just she remembers the direction pihu flied..my wife came running and told me Pihu has flown away from her hands,and the first feeling was as if land below our feet has slided and we took a lamp and made a call to all people around that Pihu has flown away and every body started the search operation within minutes..it was simply our love for Pihu and Gods grace We found him sitting on a Thorny bush and totally worn out and tired.because it was his, indeed longest flight...we took him and cant express our feelings how relieved we felt that moment...next morning i again clipped Pihu..A lesson from this ...never take any risk with your bird as A Pet Bird is Invaluable and no body knows how long they can fly and of course to Fly is their Natural instinct. 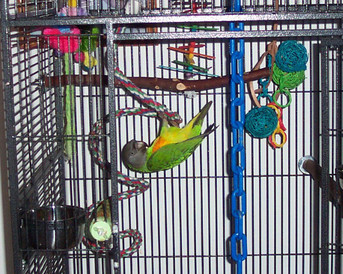 I thought I would share my story with you about the dangers in taking a clipped bird outside. A few years ago I bought a cute baby Senagel Parrot named Levi. Levi was 4 months old when we brang him home. He could not fly at the time as his fight feathers were not grown in. We took levi out in the backyard all the time . He loved it out there just sitting on our shoulder. We decided not to clip Levi so he could learn to fly. Of course that ended his trips outside. After about 6 months of Levi flying and destoying our belongings ( It was our first parrot and we did not know much) we decided to take Levi to a vet and have his wings clipped. Once again he could not fly, just glide down. So once again we took him outside on our shoulder. One morning I took Levi out with me to feed the wild birds in my backyard. We have a six foot fence around the yard and his wings were clipped so I saw no harm. When I went to put the top back on the feeder, Levi got spooked and somehow fly over the fence, around the corner, crossed a street and landed high in a tree. I was shocked as we just had his wings clipped, and he could not fly in the house. I called him for hours and I could here him answer. I finially found him but he was to high up in a tree and was scared to come to us. My husband went home to get a ladder. As soon as my husband but the ladder up, sure enough it spooked him again and he flew. This time a longer way. We looked for Levi nonstop for 2 weeks. Calling his name, putting up flyers, and even a ad in the newspaper with a reward. Sadly Levi was found 2 weeks later in a small warehouse just a quarter mile from our home. Levi had passed away. It was heart breaking. Had I only did my research and had known that even parrots with clipped wings can fly so easy when they are spooked. They get the wind of the outdoors and are just able to go. My advice is to please don't take your birds outside with out the proper cage or harness. I hope you take this advise to heart because it happened to me and it could happen to anyone. I hope my story will make you think twice about taking your birds outside. If I had only had a website like this to guide me back then. I am sure I would of never taken him outside. I am writing this in hopes to save the lives of other birds. In Loving Memory of Levi.

Ok so with the cockatiels .. they were NOT clipped and they escaped while i was changing the water pot .. so ignore that it was my fault .. BUT with alexandrine parakeet i had ,she was a female i bought her when she was 2 months old totally hand raised very friendly , lovely bird she was .. from the beggining i always clipped her wings .. and yes she was CLIPPED when she flew away.. 2 days before when she escaped i took her outside in the garden , she was sitting on my shoulder suddenly she tried to fly but faild and fell down on the ground.. and after 2 days she escaped was like in early morning i was sleeping and she was out of her cage she was 24 hour out of her cage so window was open and she was gone.. what i noticed maybe its stupid but i feel like .. ( once upon a time her wings were not clipped and she was out of her cage , window was open , door was open , and she DIDNT fly.. ) i mean like as if she dosnt know she could fly.. but the day she tried to fly and failed maybe then she discovered 'oh hell i can fly why wait in this fugly cage here i go' and next morning she escaped .. its like a prisoner .. u see when he know he have the KEY that unlocks him then why he'll wait in the prison .. so the wings are the KEYS .. i let her know she could fly by taking her outside without any harness or without cage .. so thats wht i feel. i know iv written total shit .. but my stupid mind says that lol.. with rrrico his wings were also CLIPPED the day he flew away he was also out of his cage .. window was open , something fell on the floor and it made a huge noise , he got scared and jumped out of the window before i could run to catch him, zzzooommm .................................... GONE -.- .. But miracle happened he came back because of Nigel my friend's grey.. iv seen pigeons coming back but i had never seen a Parrot coming back until that day.. God Knows what was the connection b/w nigel and rico that he responded to him and came on his balcony .. so this is my story Never let ur bird know he can fly cut of those wings before they even try .. its cruelty even though but we love r birds we cant let them go away from us yeah & Pardon me for the wording .. i hope u'll understand wht i explained..