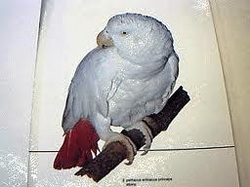 As with most parrots, mutations occur naturally in the wild. Naturally occurring Grey mutations include:

Very few of these naturally occurring Grey mutations have been bred successfully in captivity. In captivity, mutation is the result from altering the genes to adjust the melanin level, and to add other colors. Much work has been done in by breeders in South Africa, Australia, New Zealand, and Scandinavia to make mutations that are subcategories of the naturally occurring coloration.

The earliest Ino mutations date back to the 1800's. One of the more recent developments was the first all Red African Grey. It was developed by in 1998 by Von van Antwerpen from South America and his New Zealand partner, Jaco Bosman. They developed this bird from selected F2 Pied mutations.
Grey mutations include: 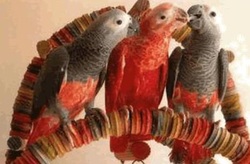 It is not uncommon for a Congo or Timneh african grey to suddenly grow the odd red feather anywhere on its body and you may see these feathers come through from time to time on your bird and it is nothing to worry about. My 22 year old Timneh has just grown two through on his chest for the first time ever-and hes looking very handsome with them! But take a look at these rare "Greys" pictured- aren't they amazing!!!!